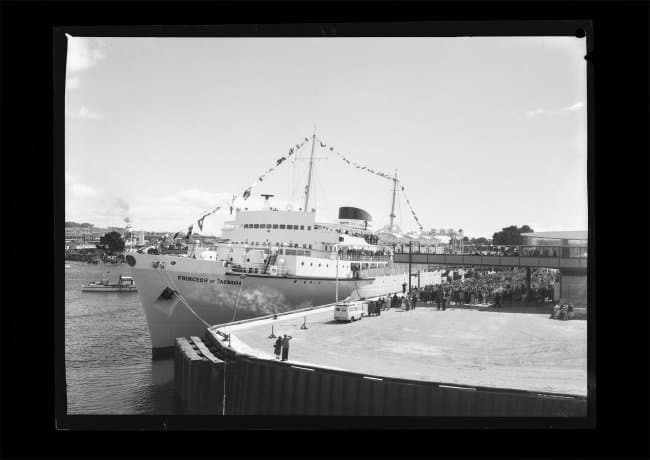 ‘That was a day that Devonport will never, ever forget. That was the start of the roll on, roll off passenger service still going today with the Spirit of Tasmania I and II. So that was the first one, big yellow boat, and I had plenty of trips to Melbourne with my mother on that ship. I can remember one particular trip to Melbourne… where it was a very rough trip. Just went up and down all night. And I can remember going down after the rough night and there were five people sitting round having breakfast. Sea sickness never affected me, and I put it down to my maritime heritage. They had a boat full of a couple of hundred people I would assume on the trip, but only five turned up for breakfast, and I was one of them. So I was always very proud of that!’
— Jim

‘In those days visitors were allowed on to the Princess, so you could go on board and see someone off, and then come ashore and throw your streamers… One other night I recall the ship was just sailing and a steward was late getting there. The Captain wouldn’t wait any longer, so the ship was just moving away from the shore, the gangway had been retracted, and the crew fed a rope over the stern for him and he had to try and grab it. I think he had to actually jump into the water and grab hold of the rope and then they pulled him on board.’
— Stephen