In August 2017 on the 40th Anniversary of Elvis’ passing, Gordon Hendricks on the Memphis Stage at Graceland was crowned the ‘2017 ULTIMATE ELVIS TRIBUTE ARTIST’, beating 24 finalists from around the world, making him officially ‘The No.1 Elvis Tribute Artist’ in the world.

The show is a three-hour celebration of ELVIS. From the early Elvis of the 50’s through to the ’68 Comeback Special’ and then the excitement of the ‘Vegas Years’. Hear all your favourite Elvis pop, power ballads and Gospel songs performed the way no other artist comes close to re-creating. The costumes, the appearance, the voice.

IT’S AS IF ELVIS IS ON STAGE HIMSELF – PERHAPS HE IS. 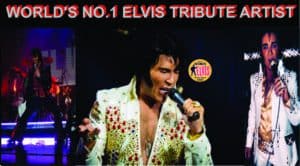